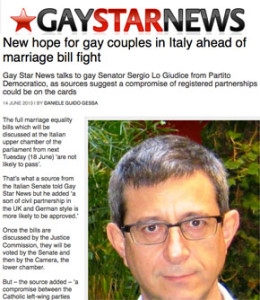 New hope for gay couples in Italy ahead of marriage bill fight
Gay Star News talks to gay Senator Sergio Lo Giudice from Partito Democratico, as sources suggest a compromise of registered partnerships could be on the cards
4 June 2013 | By Daniele Guido Gessa

The full marriage equality bills which will be discussed at the Italian upper chamber of the parliament from next Tuesday (18 June) ‘are not likely to pass’.

That’s what a source from the Italian Senate told Gay Star News but he added ‘a sort of civil partnership in the UK and German style is more likely to be approved.’

Once the bills are discussed by the Justice Commission, they will be voted by the Senate and then by the Camera, the lower chamber.

At the moment, there are three bills in the Senate. The first one has been presented by Sinistra, Ecologia e Libertà party (SEL) – led by gay Puglia governor Nichi Vendola.

The second bill has come from Movimento 5 Stelle, an anti-bureaucracy and populist movement and party, but is similar to the SEL’s one.

Gay Star News contacted Lo Giudice, from left-wing Partito Democratico (PD), in order to know what is happening in Italy right now. Lo Giudice married his partner in Norway a couple of years ago.

> What’s the chance of a new law being approved?

In theory, the debate which will start next Tuesday [18 June] could lead to something new. Today the pro-same-sex marriage Members of Parliament and Senators are not the majority.

But I think that a good and productive debate could lead to a new, revolutionary law.

> Are the right-wing parties going to present their own laws?

But this bill is not a full marriage equality one. It does not include the right to adoption.

> What’s your stance on the LGBT rights debate?

I stand for the full marriage equality. I want marriage, I think this is the only solution to our problems.

> Is Italy going to oppose a future gay marriage law as it happened in France?

The French opposition came from a movement rising from the churches and from the religious movements.

Italy has now changed. It’s not like 10 years ago, the Italians are now ready to accept new laws and new gay rights.

This is the first time gay marriage is being discussed in the Justice Commission of the Senate. I’m full of hope, this time.

> A source told us the bills are not likely to pass. What do you think?

I think that now Italy is a different country. Even the most Catholic politicians are presenting their bills. This means the church lovers have understood there’s no alternative at the moment.

> Is Italy respecting the constitutional court ruling asking the parliament to guarantee the LGBT rights? The ruling dates back to 2010.

The new bills and the right-wing parties’ proactivity is now a consequence of that ruling.

Italian parties are very close to the Vatican, this is true. The Italian politicians are always looking for the Pope’s approval, this is true as well.

But I think that now the costitutional court is imposing a new path – finally.