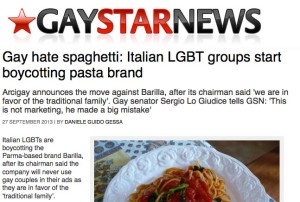 Arcigay announces the move against Barilla, after its chairman said ‘we are in favor of the traditional family’. Gay senator Sergio Lo Giudice tells GSN: ‘This is not marketing, he made a big mistake’ 27 September 2013 | By Daniele Guido Gessa

Italian LGBTs will be turning to a different brand of pasta after Barilla spurned gays from its commercials.

Italian LGBTs are boycotting the Parma-based brand Barilla, after its chairman said the company will never use gay couples in their ads as they are in favor of the ‘traditional family’.

Guido Barilla, one of the owners of the most famous Italian pasta company which exports to the United States and Latin America as well, said: ‘We won’t include gays in our ads, because we like the traditional family.

‘If gays don’t like it, they can always eat someone else’s pasta. Everyone is free to do what they want, provided it doesn’t bother anyone else.’

Arcigay launched a new campaign. ‘Siamo tutt* della stessa pasta’ (we are all made of the same pasta) is the motto. Tomorrow (28 September) LGBT activists will stand in front of several Italian supermarkets and protest against the company.

‘Luckily, yesterday we saw that now the Italian society cares about discrimination. The reactions on the social networks were stunning and incredibly important to our community.’

Lo Giudice, who has a seat at the Italian upper chamber of parliament, added: ‘Now several Italian companies should update their vision of family.

‘In Italy, one child in three grows up with unmarried parents, gay families are very common and there is not a “traditional” family, not anymore.

‘Barilla did what businessmen should not do. He excluded a big part of society, saying they are not welcomed. This is not marketing.’
– See more at: http://www.gaystarnews.com/article/gay-hate-spaghetti-italian-lgbt-groups-start-boycotting-pasta-brand270913#sthash.btoNC5me.dpuf